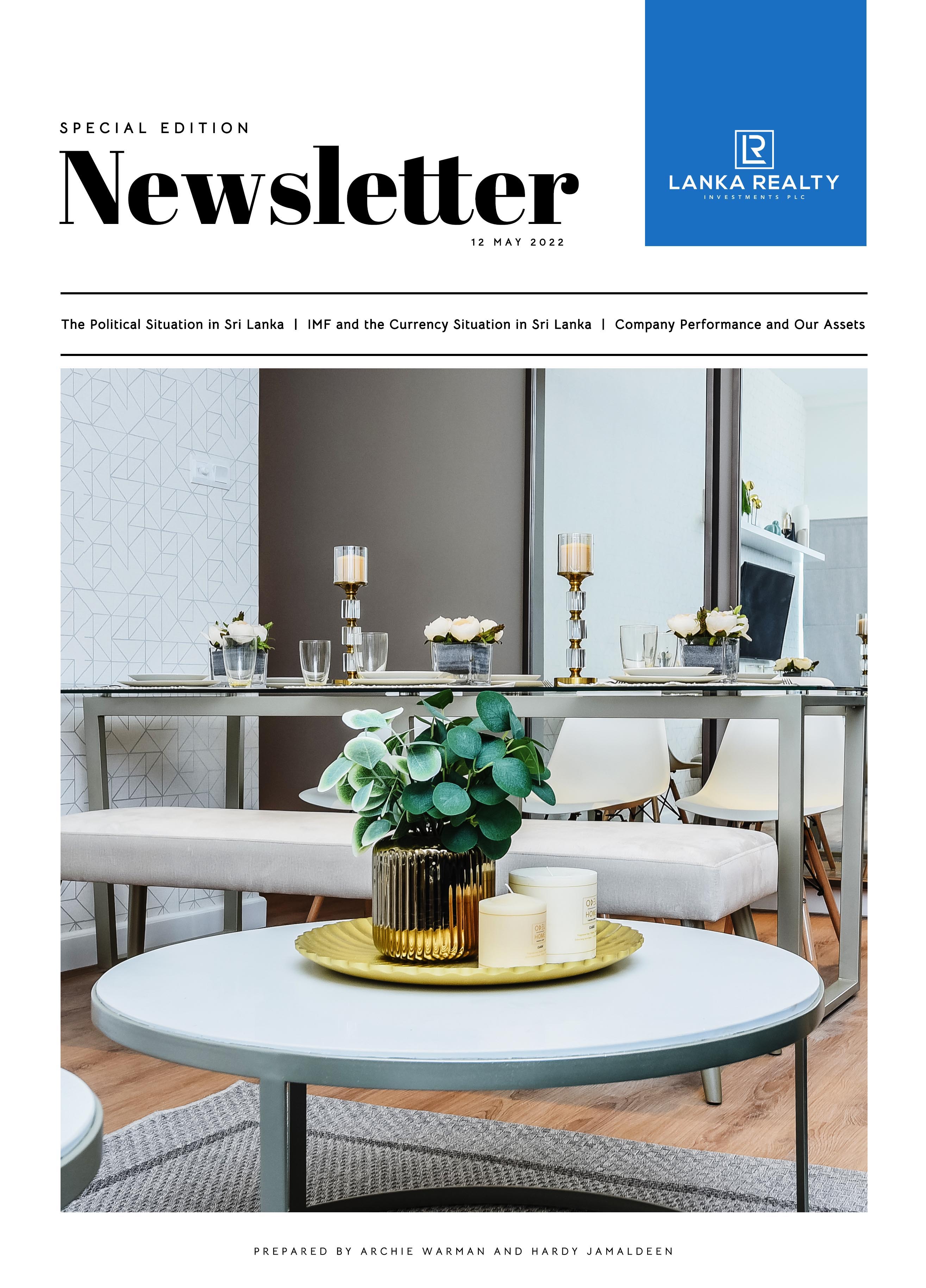 Currently, the island is grappling with an economic and political crisis. The current administration is being pressured by the people for solutions to the shortage of essentials such as gas, fuel and food, and foreign currency. Following some significant moves within the administration, the current government has made a move to approach the international community for support. This includes implementing an I.M.F program and other financial mechanisms and policies to further stimulate growth and foreign currency inflow.

Lanka Realty Investments PLC has been resilient in these times and has managed to record an increase in revenue despite the crisis in the country.

"Hardy and I are extremely proud of our team’s performance, our early covenant of hiring the best has paid dividends in the most trying of circumstances. The pandemic and the marco environment forced us to reevaluate our entire business. It has given us the opportunity to access the minutia of every underlining asset and to visualize the positive change. If you had told us at the beginning of the pandemic that first and foremost we survived, that we were able to carry out a rights issue which lead to the friendly acquisition of On’ally Holdings Plc and all the asset management potential of Unity Plaza, that we manage to let 90% + of HQ Colombo a commercial office building whilst the rest of the world stayed at home and further to be the owner of the fasting selling affordable housing complex in Colombo we would have taken it. Once tourism comes back for good (the situation is still fluid) we will have a very interesting direct property investment business with solid revenue growth! Our aim remains the same, to be the number one listed property entity in Sri Lanka." - Archie Warman, Executive Director at Lanka Realty Investments PLC.

Ranil Wickremesinghe, the former Prime Minister, was sworn in as the new Prime Minister on May 12. There is a potential for complications because he is the sole member of his party who holds a seat in Parliament. Some regard this as a possible flaw.

Religious organisations began protesting against Wickremesinghe's likely appointment amid rumours even prior to the official appointment. The main opposition party, the SJB, is sure to raise concerns as well. Sajith Premadasa, the party's leader in Parliament, has offered to assume the role, but only on specific terms.

On Monday, May 9, escalating violence between pro-government and anti-government protesters pushed Prime Minister Mahinda Rajapaksa and his cabinet to resign.

On May 11 at 9:00 p.m., in his speech to the nation, the President stated that a new Prime Minister and a government would be appointed "within this week," which he did. He also stated that he would support the Constitution's 21st Amendment, which would remove the executive presidency of its broad powers and return them to Congress. The 21st Amendment was introduced in Parliament on May 6, the last day of the last parliamentary session.

Meanwhile, President Gotabaya Rajapaksa is under increasing pressure to resign. Only once a new Prime Minister and cabinet have been constituted may the President retire. In that case, the new Prime Minister will temporarily assume the presidency until Parliament picks a new President by a resolution.

IMF and the Currency Situation in Sri Lanka

The economic news is mixed. Nandalal Weerasinghe, the Governor of the Central Bank of Sri Lanka, gave a press conference on the afternoon of May 11 to discuss the state of the economy. Three key messages emerged from his remarks, which should be highlighted.

In terms of the crisis, he stated that 'technical discussions' with the IMF on a relief package are ongoing, and the nomination of a new Prime Minister and his cabinet is still pending. Before negotiations on an IMF package can commence, Sri Lanka must reach debt restructuring agreements with bondholders.

Meeting commitments in the following months will require arranging bridge finance. Requests to trigger contingency clauses in World Bank and ADB project agreements will allow Sri Lankan project funds to be utilised for emergency relief. However, this will not suffice; larger loan packages will be required.

Meanwhile, India has confirmed another extension of its fuel import line of credit. Negotiations are underway to determine the utilisation of the Chinese swap.

Fiscal reforms that increase tax collections — and in effect raise taxes – will be required. This will put pressure on the corporate sector, but the current low tax environment is unsustainable. Low tax realisation, according to experts, was a significant contributor to external debt.

The foreign exchange reserves and expenditures will be closely monitored until the external sector is once again manageable. In other words, until the economy is well on its path to recovery, accessibility on the external account will be limited to prevent abuse of scarce resources.

The Central Bank of Sri Lanka (CBSL) intends to limit currency volatility by working with banks to provide a range of daily interbank exchange rate movements. Banks have been urged to give priority to vital medicines, food, and oil and gas imports when allocating forex.

In Sri Lanka, the annual average inflation rate remains persistently high. It is expected to remain at 22% till the end of 2022. Following the social and political unrest, the government temporarily halted fuel distribution, with only critical and essential services receiving fuel.

Hardy and I are pleased that the Company’s financial performance has showcased resilience in difficult times. We saw a 187% increase in our group revenue (LKR 1.2 billion |USD 3.3 million in the year ended 31st March 2021/22 compared to LKR 432 million | USD 1.2 million earned during the year 2020/21). This revenue growth is mainly attributed to experiential residential sales of Mulberry, full occupancy at commercial properties HQ Colombo and Unity Plaza. We have achieved a profit after tax of LKR 1.7 billion | USD 5 million during the year under review compared to the loss after tax of LKR 201 million | USD 0.6 million recorded in the previous financial year. Majority of the profit earned in the year ended 31st March 2021/22 is from the fair value gained from investment properties.

Forecast turnover for 2023 is estimated to be around LKR 3.8 billion | USD 10 million through residential sales and on-going commercial revenue, while the main contributing difference being the leisure market. As per the current situation in the country, we can expect a highly challenging year ahead.

We are ready to meet this challenge and will try to stick to what we can control.

Having achieved the highest sq.ft rate for retail space in the country at an average price per sq.ft of LKR 1,100, we are pleased to report that we have commenced signing lease renewals based on the new headline rents achieved on a floor by floor basis. We have managed to achieve 72 lease renewals. Installation of the glass facade is currently underway and the total cost is estimated to be LKR 67 M. It should be noted that management was able to procure the relevant imported material at LKR 205 per USD (prevailing rate is c. LKR 359.54 per USD). More than 60% of the renovations and modifications are complete.

We are pleased to inform you that our in-house sales team consisting of three sales personnel have managed to achieve and outperform the sales target by 40% during the last 3 months. We have increased the sales prices by 17% with effect from 1st of January 2022 and our sales team has managed to successfully close 21 apartment sales based on these revised sales prices with no discounts. Prices were further increased by 25% with effect from 1st of April 2022 to protect against inflation. The sales drive is progressing well with 85 apartments sold to date (70%). Out of the 85 units sold we have recorded 77 Sales & Purchases Agreements signed and 8 reservations as at the end of March. Total value of the 85 units sold is LKR 1.9 billion of which we have managed to collect LKR 867 million. We have LKR 1.014 billion to collect from the units sold at pre-arranged dates. The total value of the unsold apartments amounts to LKR 1.5 billion.

We have achieved 90% occupancy at HQ Colombo. Despite the COVID backdrop, we have managed to secure 100% of the rental payments. We are developing HQ’s retail presence on the building’s rooftop. This will benefit the HQ Colombo community. Presently we have completed the steel roof structure (total cost amounted to LKR 2Mn), installation of roofing sheet and gutters (total cost amounted to LKR 1.5Mn). We are currently at the design stage for plumbing works and kitchen equipment. We have also received quotations for aluminum and glass work, cladding, bathroom tiles and fittings, durra board and cladding.

We had an exceptional quarter with occupancy rates reaching pre-covid levels with increasing tourist arrivals. However, with the current situation, we expect the tourist arrivals to decline over the coming months due to the current economic situation. With plans for further expansion, W15 is being rebranded and launched as the W15 Collection. This brand will act as an umbrella organization under which all our leisure properties will be managed. The W15 Collection website has been launched, while the existing and new property websites are going live in the near future. W15 Escape Ahangama is in the development stage of converting the existing property to a Surf and Wellness retreat by September of 2022. The property located in Colombo 6 which was branded as W15 Colombo will seek longer term lettings as opposed to shorter term stays. We are currently conducting light marketing activities as well as completing the refurbishment of 2 of the 6 town houses within this property.

The new pre-cast product which was launched in 4Q 2020 is seeing positive Traction. The demand for the product remains high. As a part of our sustainability initiatives, we have concluded planning and signed a contract with High Energy Private Limited for solar panel installation. The project is expected to be completed in the next quarter. Introduced new product range; grass paving, Eliyana, 60mm interlocking paving blocks to increase revenue. Renovated and converted existing factory building for dormitory to run 2 shifts to increase the production.

1,600 affordable luxury apartments and housing in the development pipeline

The landbank in Ja-Ela (Thudella Holdings (Pvt) Ltd) has key approvals from regulators to build 54 detached villas and 32 low rise apartments. A greenfield site of 804 perches (5.02 acres), strategically placed 1/2 km off the CKE Motorway. The land is very well located to take advantage of Sri Lanka’s proposed push towards creating a Megalopolis. Plans are underway to commence sales in Q4 2022 under our affordable and luxurious residential property brand; Mulberry.

Further to our political update please find attached our asset management update and issues at large in Sri Lanka.

Sri Lanka is going through an unprecedented time of crisis due to economic and political instability. The island nation is grappling with protests, a lack of fuel and gas, and an impending food shortage. Learn about the current political environment and the ongoing situation.