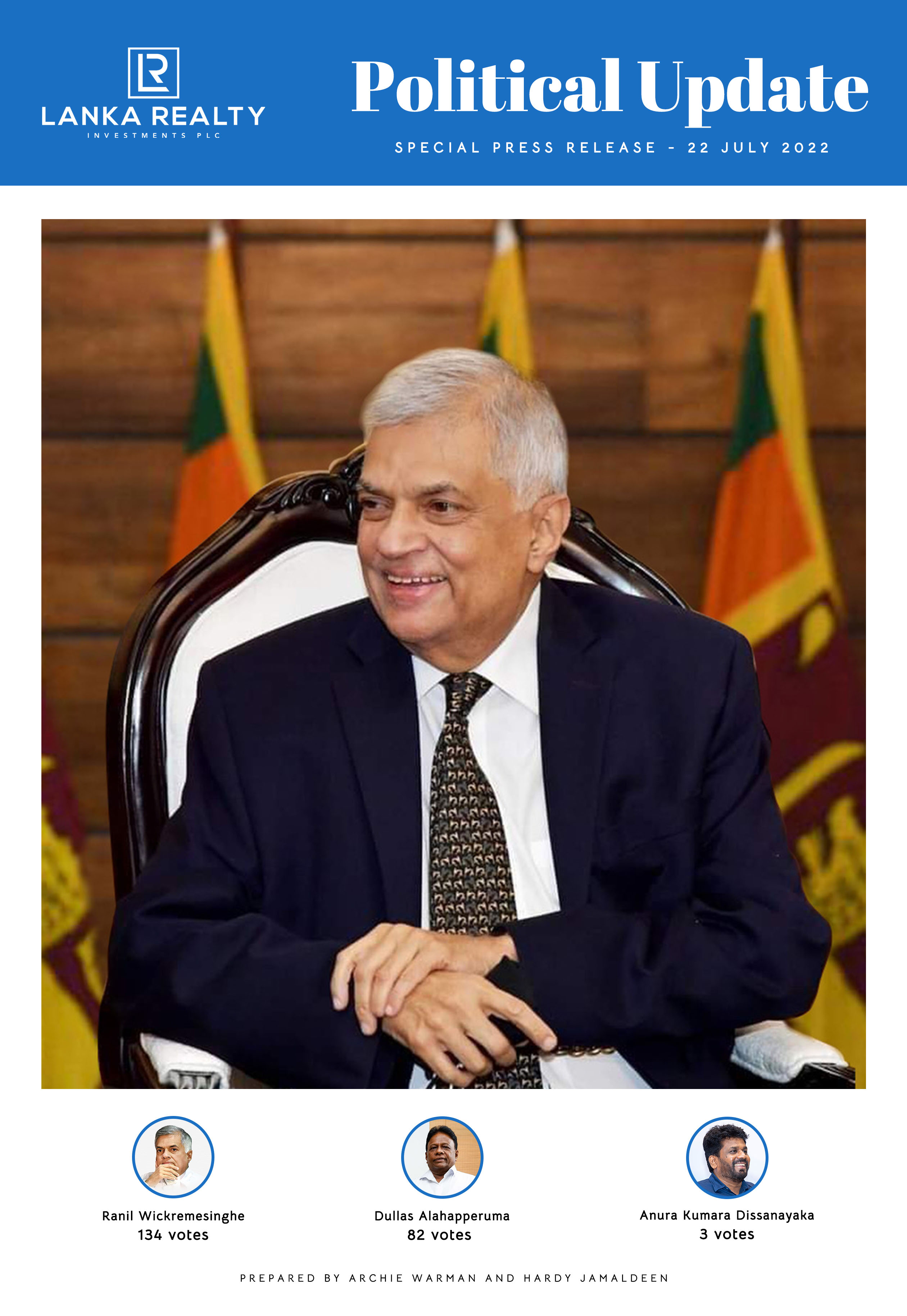 Protestors once again occupied the streets of Colombo demanding the resignation of President Gotabaya Rajapaksha, following the mass protests that steered to the resignation of the former Prime Minister Mahinda Rajapaksha. Protestors gathered in large numbers from all over the country at Galle Face adjoining the President’s official residence and the Presidential Secretariat. This was by far the largest assembly held during the past few months of persistent demonstrations against the government’s mismanagement of the current economic crisis.

Regardless of the number of rounds of tear gas and water cannons by the police and armed forces used to disperse the aggravated crowds, protestors invaded the Presidential Secretariat and the official residence of the President. President Gotabaya Rajapaksha was moved to a secured undisclosed location prior to these events taking place.

Concurrently, protestors overran the Prime Minister’s official residence, who was also relocated to an undisclosed venue prior to these events. Towards the latter part of the day, ensuing the attack against several journalists outside the Prime Minister Ranil Wickremesinghe’s private residence in Colombo, the protests escalated and his house was set on fire by unidentified individuals. Subsequently, three suspects were taken into custody for suspected arson.

As a result, several ministers also tendered their resignations from their respective ministerial portfolios.

A total of 105 individuals were admitted to the hospital with injuries. Out of the injured, 11 were identified as journalists. No fatalities were reported.

As per the constitution, on the occasion that the President and Prime Minister of Sri Lanka both cease to hold office, the Speaker of Parliament becomes the caretaker President, to serve out the remainder of the President’s term.

The Speaker, who met with all leaders of the political parties, held a special meeting on the 11th of July. Party leaders decided to convene Parliament on the 15th of July, after President Rajapaksha’s resignation. Nominations for the post were then accepted on the 19th of July to elect a new President on July 20th.

It is reported that there were no adverse effects caused to either the Port of Colombo or the main Bandaranayake International Airport resulting from these protests. Prior to the events on the 9th, the Sri Lanka Ports Authority issued a statement and made assurances that port activities will not falter despite the continuing fuel shortages. Activity in all industrial zones, private sector offices and other manufacturing operations are expected to return to the status quo.

The current political changes will imminently affect the efforts of returning economic stability to the country. From our point of view, the process of reviving the economy will further delay due to the civil unrest aggravated by the political instability.

The IMF Senior Mission Chief for Sri Lanka issued a statement reaffirming its commitment to support Sri Lanka, "We hope to resolve the current situation that will allow for the resumption of our dialogue on an IMF-supported programme, while we plan to continue technical discussions with our counterparts in the Ministry of Finance and the Central Bank of Sri Lanka”.

Sri Lanka will present a debt restructuring programme to the IMF in August to secure an Extended Fund Facility (EFF). Discussions are also underway with India, Japan and China to form an aid consortium once a staff-level agreement with the IMF is reached.

President Gotabaya Rajapaksha, who was held safe in an undisclosed location since the 9th of July, left the country in the early hours of July 13th. It was further confirmed by the Sri Lanka Air Force (SLAF) that the President Rajapaksha left for Maldives on an SLAF aircraft, subject to the approval of Defence, Immigration and Customs at Bandaranaike International Airport. President’s formal resignation was expected to be released once he arrived at a safe haven, during the time, constitutionally he remained the President of Sri Lanka.

The President had not officially resigned on the 13th of July, although he had committed to hand over his resignation letter on the said date as the Speaker of the Parliament had indicated. However, during the course of the day President Rajapakse appointed Prime Minister Ranil Wickremesinghe as the Acting President while he was out of the country as per the constitutional powers vested in the office of the President.

Protestors gathered outside the Prime Minister’s office and entered the premises by force in opposition to his appointment as the Acting President of Sri Lanka. Police and the armed forces used tear gas and water cannons to disperse the protestors prior to their forced entry once again. Concurrently, protests took place outside the Parliament premises and outside the residence of the Speaker of Parliament. This was met with similar resistance from the police and the armed forces. While the protests continued at the Galle Face Green and in several other locations outside Colombo, a total of 84 individuals were admitted to hospital with injuries during clashes between protestors and security forces. One fatality was reported caused by respiratory issues from the inhalation of tear gas.

Speaking to media, the now Acting President called upon the Chief of Defence Staff, Commanders of the Armed Forces, and the Inspector General of Police to restore law and order. The Acting President authorised the arrest of those disrupting law and order and acting in a riotous manner. A state of emergency was declared, and an overnight curfew was imposed in the Western Province till 5.00 am on the 14th of July.

In a media statement to the public, The Chief of Defence Staff requested the public to cooperate with the forces and the police to maintain law and order during this transition period.

The national state-owned TV stations, the Sri Lanka Rupavahini Corporation (SLRC) and Independent Television Network (ITN) temporarily suspended their telecasts after the premises were surrounded by protestors demanding coverage of their statements.

All political party leaders called on the Acting President/Prime Minster to resign immediately. Constitutionally, until a new election is held among Members of Parliament, the powers vested in the President fall to the Speaker of Parliament.

Several Members of Parliament from different political parties announced their candidacy for the office of the President through a secret ballot which took place in Parliament to elect the new president on the 20th of July.

Furthermore, a Gazette was issued declaring a state of emergency island wide from the 18th of July. Additionally, Secretary General of the United Nations expressed his solidarity with the people of Sri Lanka and called for a smooth transition of government to find solutions to the ongoing economic crisis. He also condemned all acts of violence and called for those responsible to be held accountable.

Appointment of the New President

On the 19th of July, Prime Minister Ranil Wickremesinghe, Member of Parliament Dullas Alahapperume and the party leader of Janatha Vimukthi Peramuna, Anura Kumara Dissanayaka nominated themselves for the vacant position of President.

On the 20th of July, Prime Minister Ranil Wickremesinghe won the election by 134 votes through a secret ballot held at the Parliament. Dullas Alahapperuma received 82 votes and Anura Kumara Dissanayaka received 3 votes. A total of 223 Members of Parliament cast their votes; 2 MPs abstained from voting. Four votes were considered invalid, and the number of valid votes were 219.

Although President Ranil Wickremesinghe was the most suitable candidate to use his international network and deal with the IMF to revive the economy, he’s not the people’s choice for a President. And we are concerned of protests culminating as before. In the 2019 elections he entered the Parliament with one seat from his Party.

The country desperately needs political stability and we expect the new regime to make rapid progress in managing the current economic crisis. However we are concerned if the public is willing to remain patient after all the unrelenting protests they ran for a real change in this current economic climate.

Further to our political update please find attached our asset management update and issues at large in Sri Lanka.

Currently, the island is grappling with an economic and political crisis. The current administration is being pressured by the people for solutions to the shortage of essentials such as gas, fuel and food, and foreign currency.